NASA astronaut Douglas Wheelock, who was aboard the International Space Station, shares his pictures of the Earth with the world through Twitter.

Known to his nearly 68,000 Twitter followers as Astro_Wheels, Wheelock has been posting impressive photos of the Earth, and some of his thoughts, since he moved into the space station.


Greek islands on a clear night during our flight over Europe. Athens shines brightly along the Mediterranean Sea. 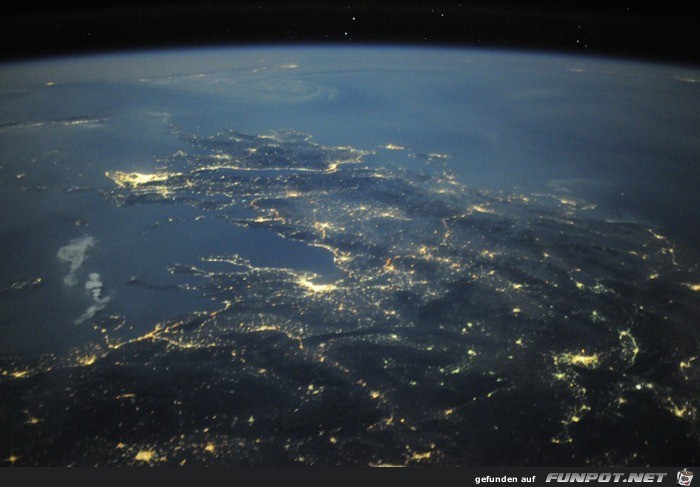 'Mystery Island' ...located in the Indian Ocean close to Madagascar. Interesting features on the island and the unusual shape should be enough to help you discover this beautiful place. 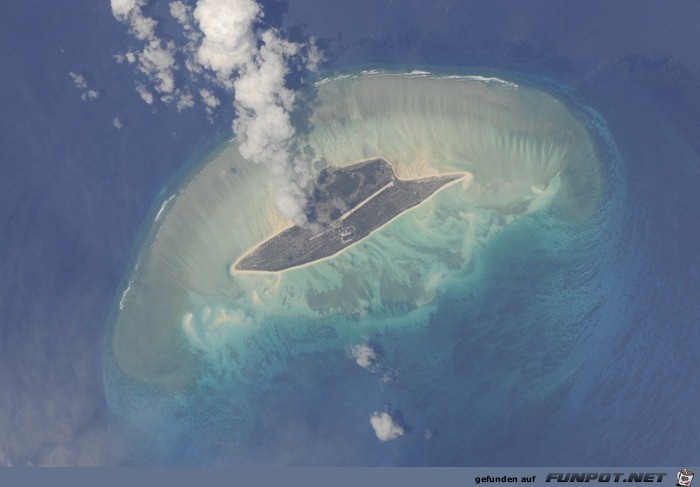 Northern lights in the distance in one of the finest nights over Europe. The photo clearly shows the Strait of Dover. Paris is dazzling with the city lights. A little fog over the western part of England, particularly over London. 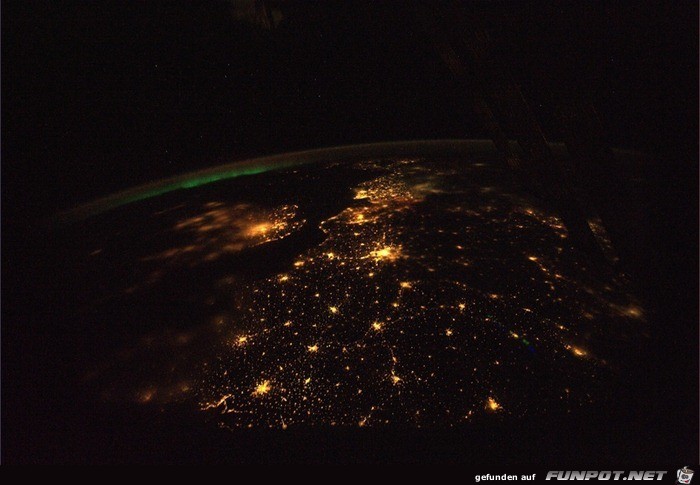 The moon is breathtaking.

Of all the places on our beautiful planet, few can rival the beauty and richness of colors in the Bahamas. In this photo, our ship is seen against the backdrop of the Bahamas. 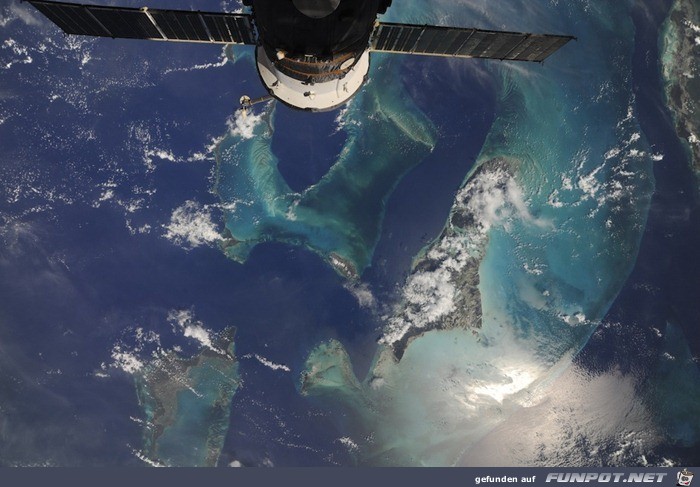 At a speed of 28,163 kilometers per hour (8 kilometers per second), we rotate the Earth's orbit, making one revolution every 90 minutes, and watch sunsets and sunrises every 45 minutes. So half of our journey is in darkness. For the work we use lights on our helmets. 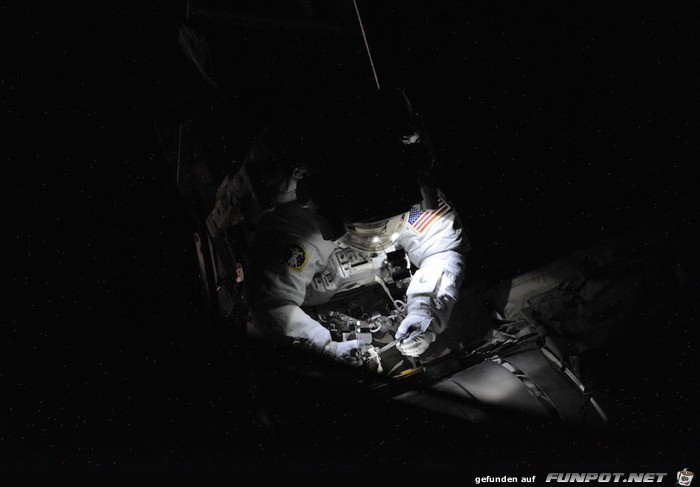 Every time I look out the window and see our beautiful planet, my soul sings! I see blue skies, white clouds and bright blessed day. 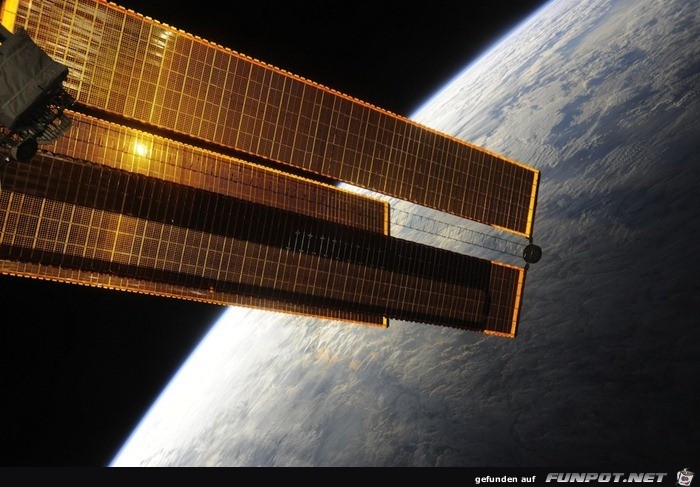 Another spectacular sunset. We see 16 such sunsets each day, and each of them is really valuable. 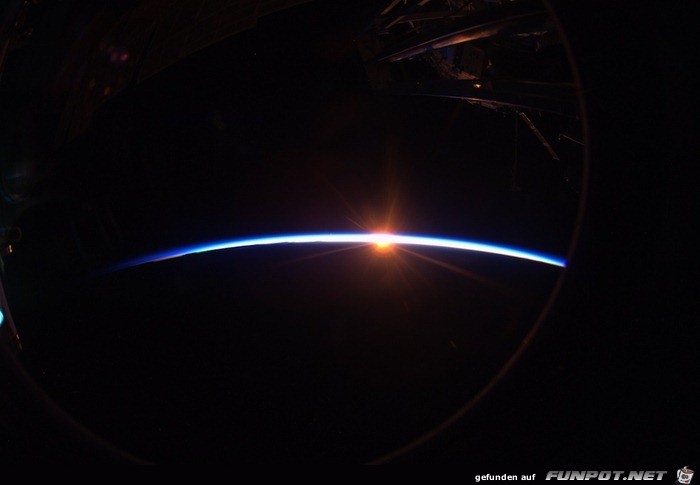 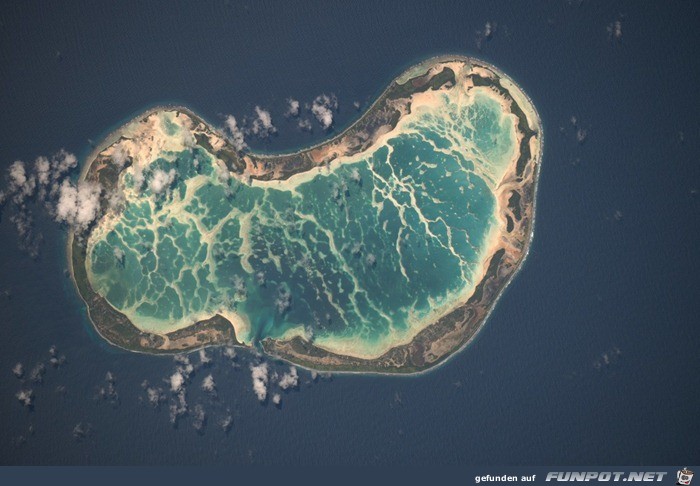 Perfect reflection of sunlight in the eastern Mediterranean. 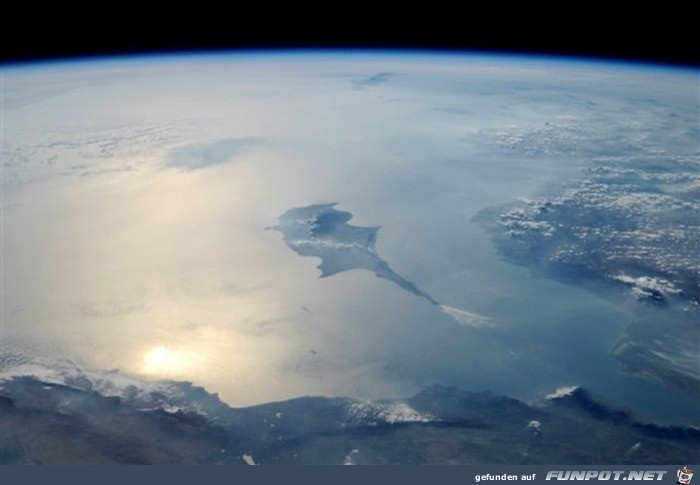 Above the center of the Atlantic Ocean, before another stunning sunset. Downstairs in the setting sun, visible spiral Hurricane Earl. 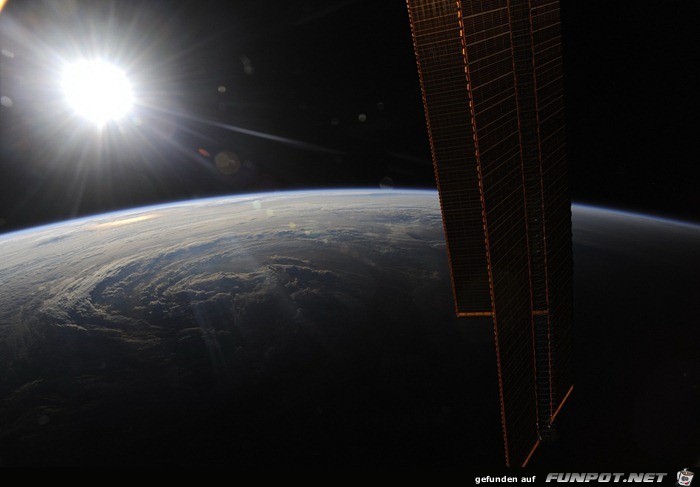 A little farther east, we saw a sacred monolith Uluru, better known as Ayers Rock. I've never had the opportunity to visit Australia, but someday I hope that I will stand by this miracle of nature. 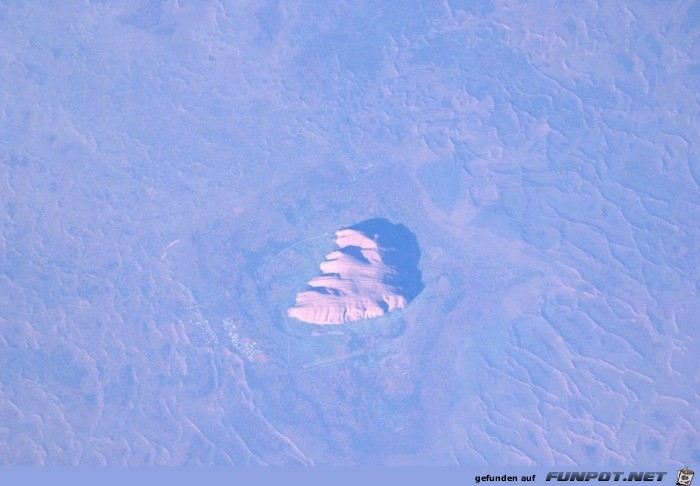 Morning over the Andes in South America. I do not know for sure the title of this peak, but was simply amazed by her magic, stretching to the sun and wind tops. 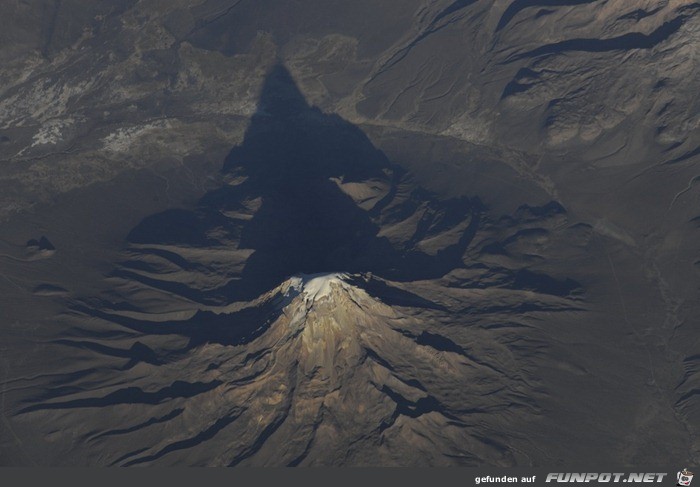 Over the Sahara desert, approaching the ancient lands and 1000-year history. River Nile flows through Egypt by the Pyramids of Giza in Cairo. Further, the Red Sea, Sinai Peninsula, Dead Sea, Jordan River, as well as the island of Cyprus in the Mediterranean Sea and Greece on the horizon. 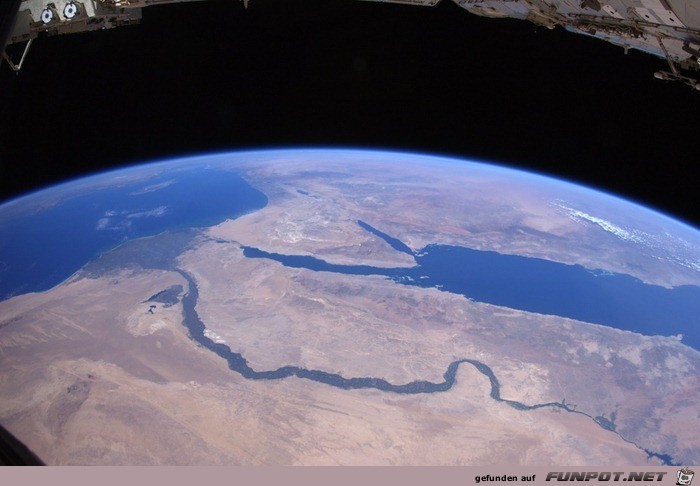 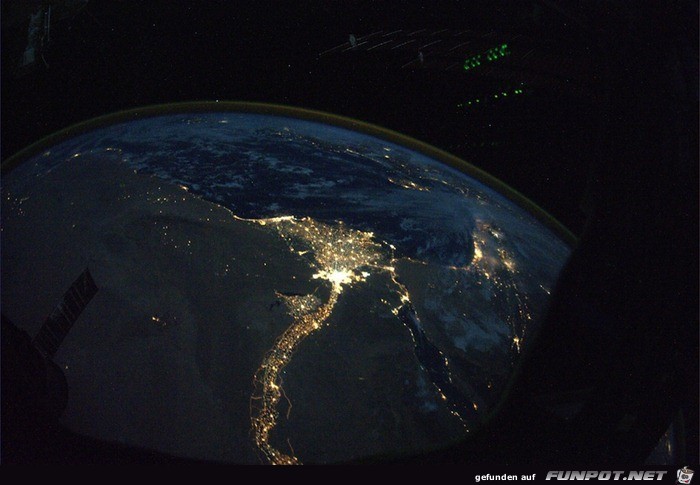 Our unmanned 'Progress 39P' approaches the ISS for refuelling. It's full of food, fuel, spare parts and all necessities for our station. Inside was a real gift - fresh fruit and vegetables. What a miracle after 3 months of food from a tube! 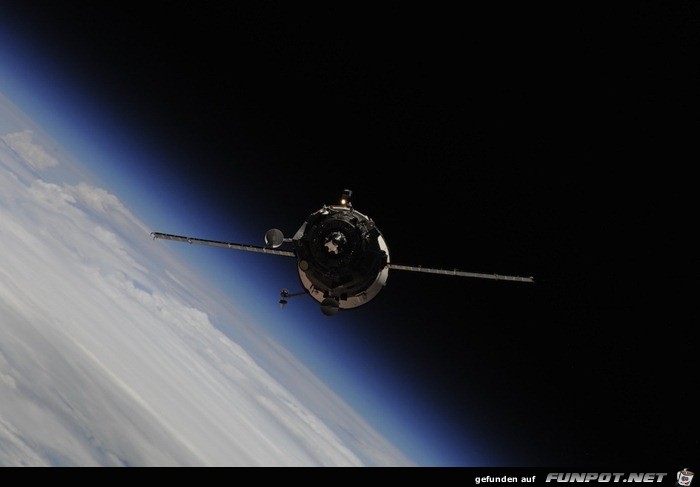 I wanted to share with you this view from the Dome. We said goodbye to the members of our group Sasha, Misha& Tracy this weekend, and they returned safely back to Earth. In this photo, Tracy quietly dreams of returning home. 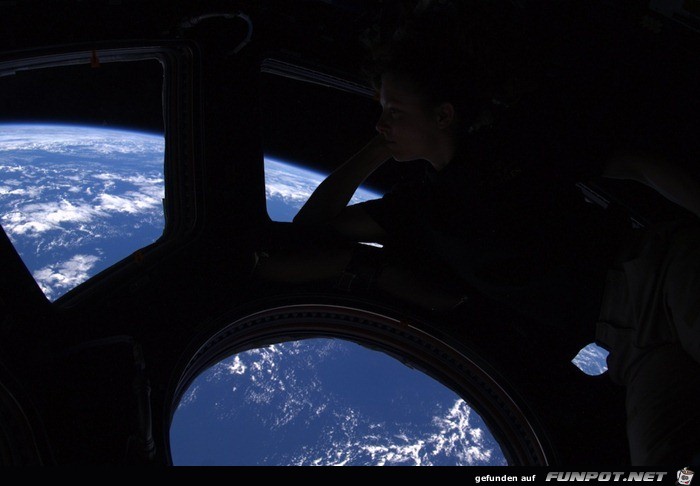 Module Union 23C Olympus docked with the ISS. When our work ends here, we go back home to Earth. We fly over the snow-capped peaks of the Caucasus. The rising sun is reflected from the Caspian Sea. 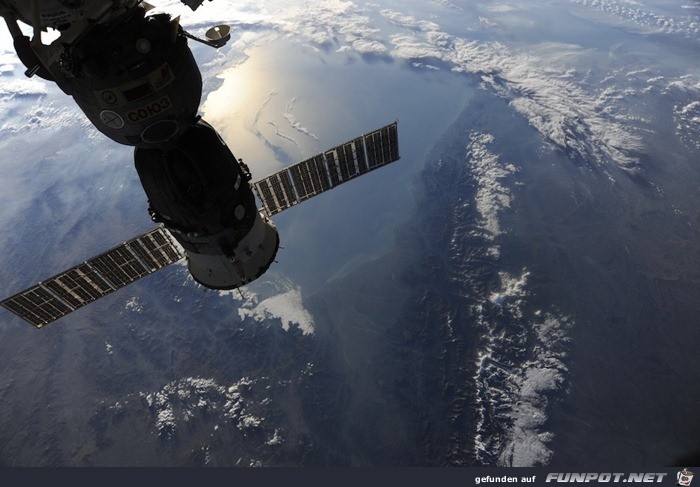 The flash of color, movement and life on the canvas of our amazing world. This is part of the Great Barrier Reef off the east coast of Australia, photographed through the lens of 1200 mm. 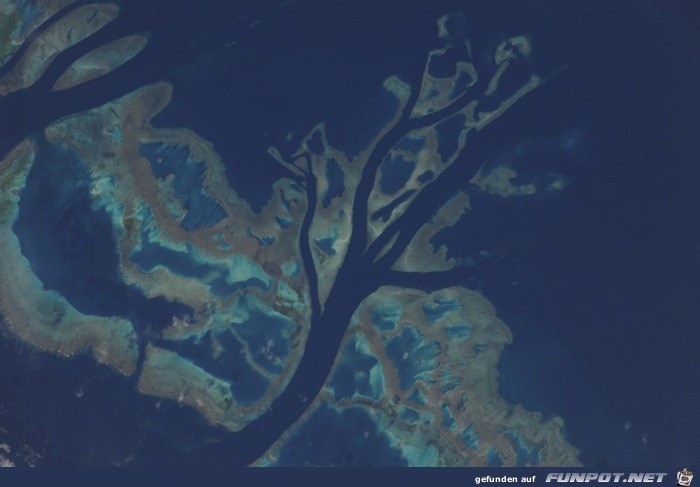 All the beauty of Italy, a clear summer night. You can see many beautiful islands that adorn the coast - Capri, Sicily and Malta. Naples and Mount Vesuvius are located along the coast. 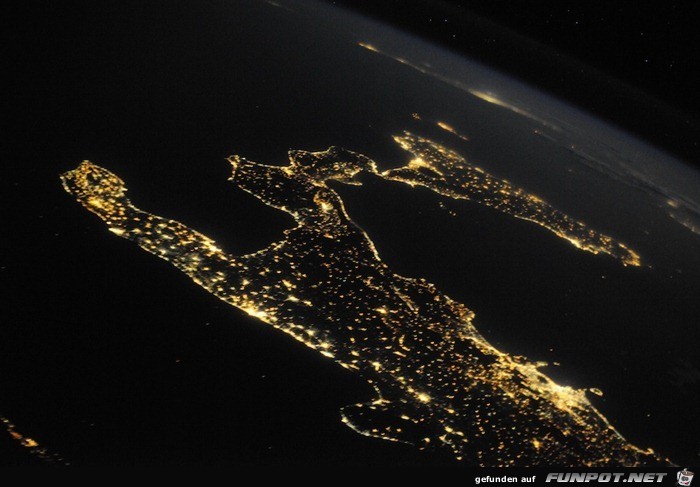 At the southern end of South America lies the pearl of Patagonia. The amazing beauty of rugged mountains, massive glaciers, fjords and seas combined in perfect harmony. 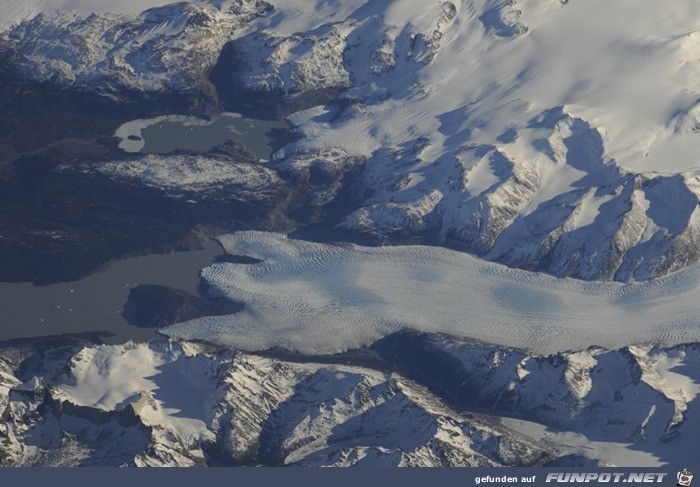 "Dome" on the side of nadir station gives a panoramic view of our beautiful planet. Fedor made the picture from the window of the Russian docking compartment. In this photo I'm sitting in the dome, preparing the camera for our evening flight over Hurricane Earl. 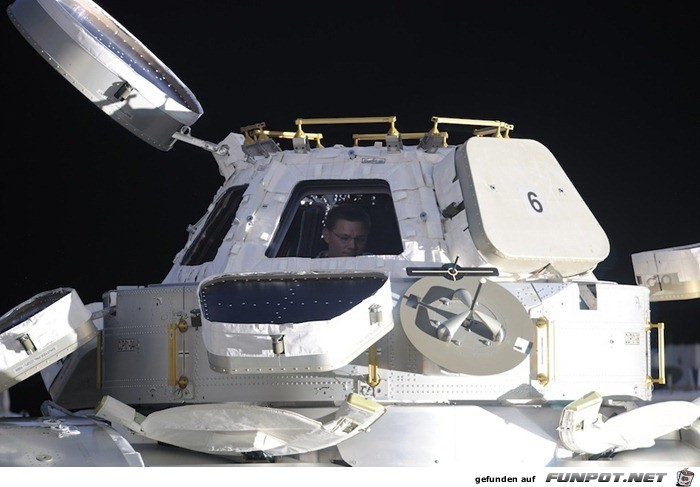 Florida and southeastern U.S. in the evening. A clear autumn evening, the moonlight over the water, and sky dotted with millions of stars. 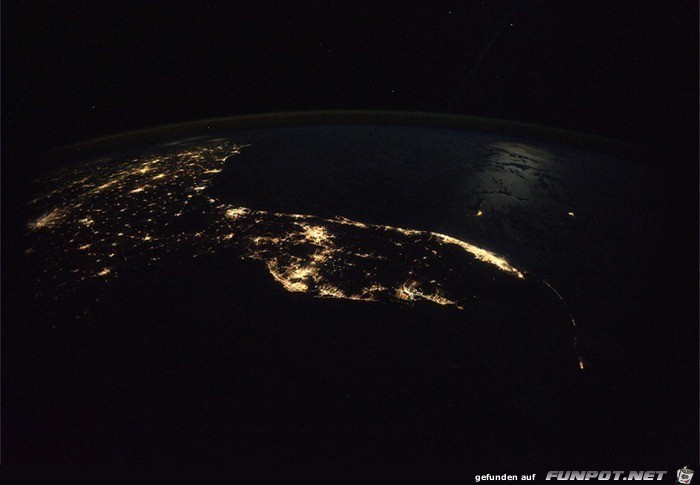 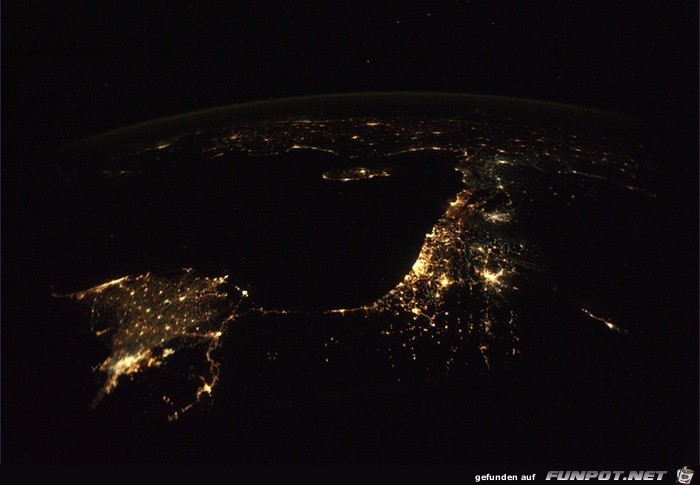 In this time of year you can enjoy the beauty of the polar mesospheric clouds. With our high-angle illumination, we were able to capture a thin layer of noctilucent clouds at sunset. 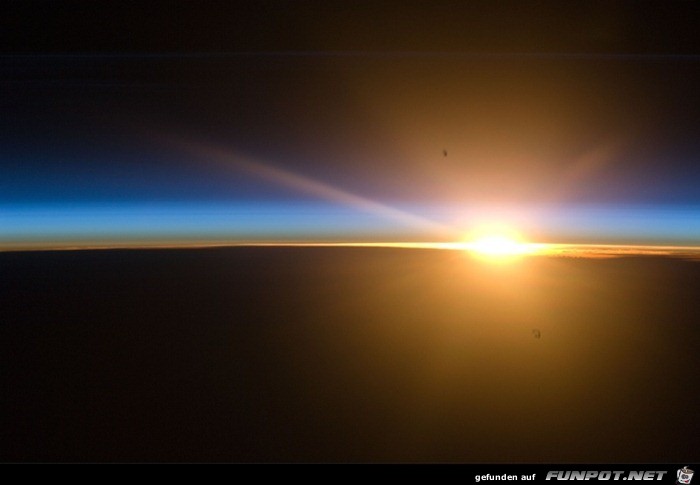 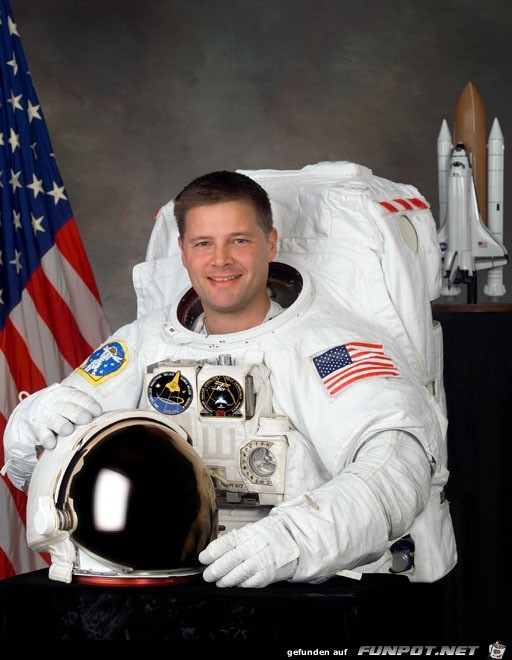