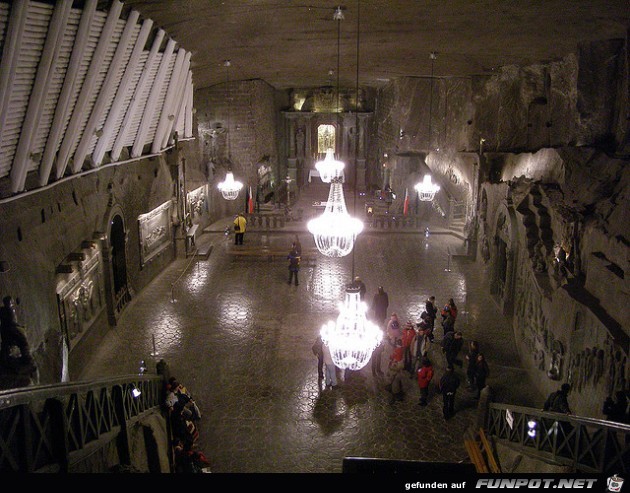 Deep underground in Poland lies something remarkable, but little known outside Eastern Europe. For centuries, miners have extracted salt there, but left behind things quite startling and unique. Take a look at the most unusual salt mine in the world. 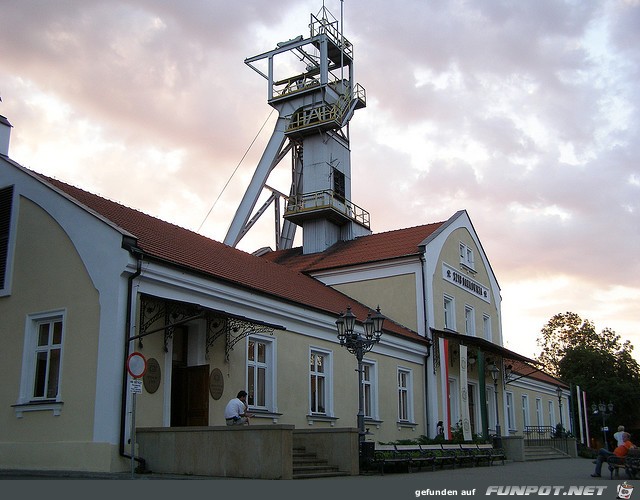 From the outside, Wieliczka Salt Mine doesnt look extraordinary. It looks extremely well kept for a place that hasn't mined any salt for over 10 years, but apart from that it looks ordinary. However, over 200m below ground it holds an astonishing secret. This is the salt mine that became an art gallery, cathedral and underground lake. 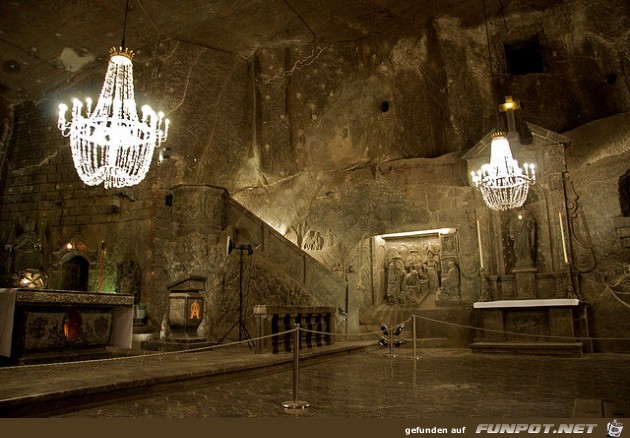 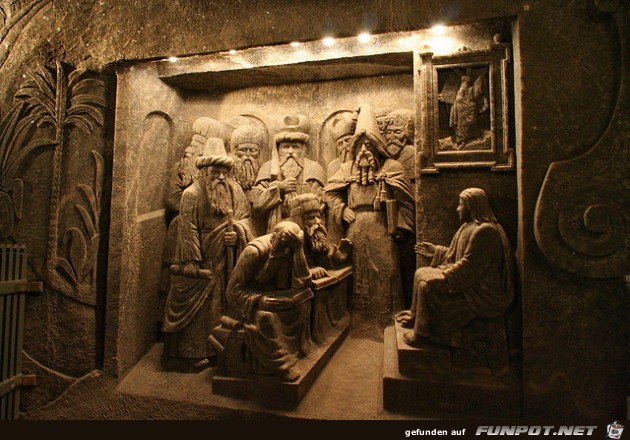 Situated in the Krakow area, Wieliczka is a small town of close to 20,000 inhabitants. It was founded in the 12th century by a local Duke, to mine the rich deposits of salt that lie beneath. Until 1996 it did just that, but the generations of miners did more than just extract. They left behind a breathtaking record of their time underground, in the shape of statues of mythic, historical & religious figures. They even created their own chapels in which to pray. Perhaps their most astonishing legacy is the huge underground cathedral they left behind for posterity. 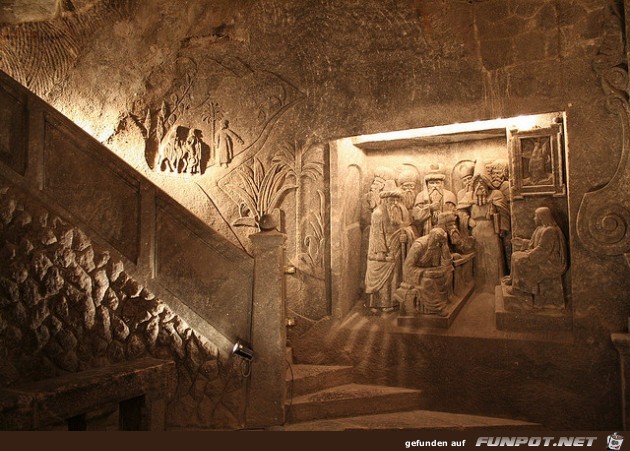 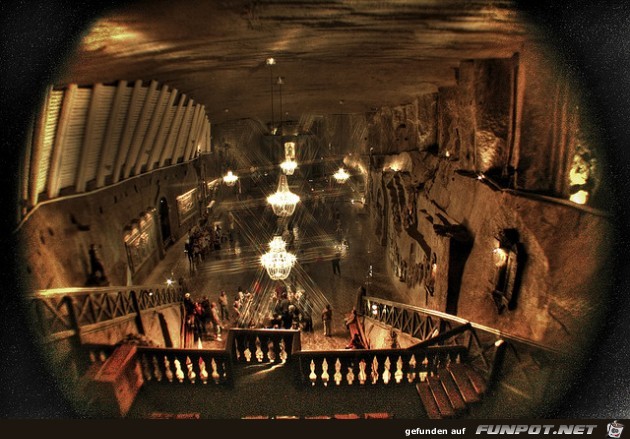 It may feel like you're in the middle of a Jules Verne adventure as you descend into the depths of the mine. After a 150m climb down wooden stairs, the visitor to the salt mine will see some amazing sights. The most astounding in terms of its sheer size & audacity is the Chapel of Saint Kinga. The Polish people have been devout Catholics for many centuries, and this was more than just a long term hobby to relieve the boredom of being underground. This was an act of worship. 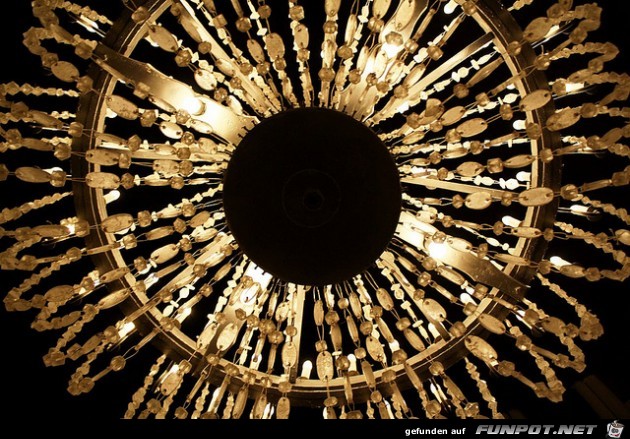 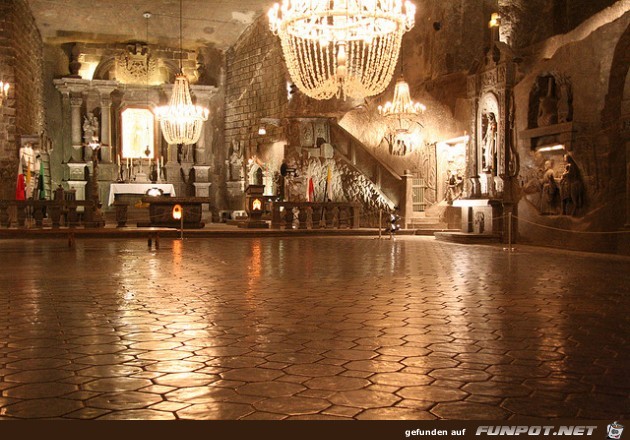 Amazingly, even the chandeliers in the cathedral are made of salt. But they weren't simply thrown together from salt hewn from the ground; the process is rather more painstaking for the lighting. After extraction, the rock salt was first dissolved, then reconstituted with the impurities removed so that it achieved a glass-like finish. The chandeliers are what many visitors think the rest of the cavernous mine will be like, because they have a picture in their minds of salt like they sprinkle on their meals! However, the rock salt occurs naturally in different shades of grey (like you'd expect granite to look). 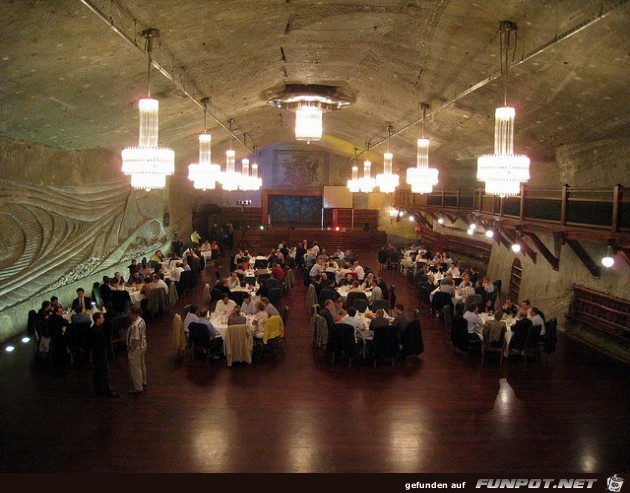 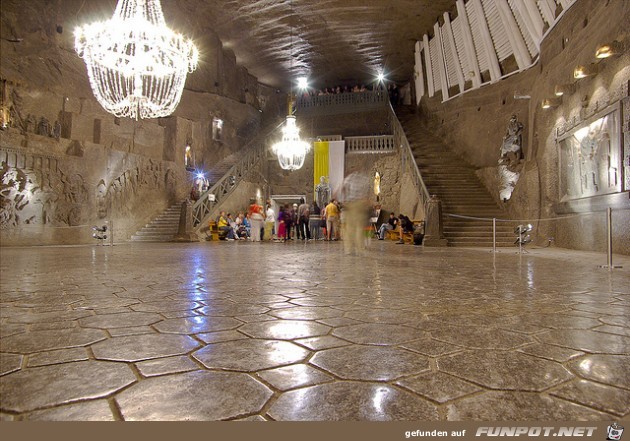 Still, that doesn't stop well over1 million visitors (mainly from Poland and its eastern European neighbors) from visiting the mine to see, amongst other things, how salt was mined in the past. 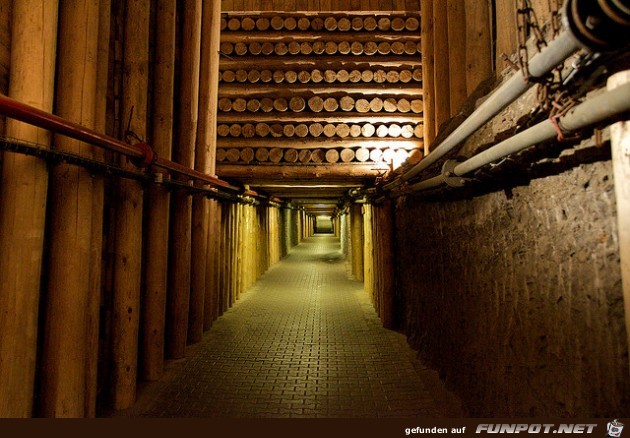 For safety reasons less than1% of the mine is open to visitors, but even that is still almost 4 km in length - more than enough to weary the average tourist after an hour or two. The mine was closed for 2 reasons: the low price of salt on the world market made it too expensive to extract here; and, the mine was slowly flooding, another reason why visitors are restricted to certain areas only. 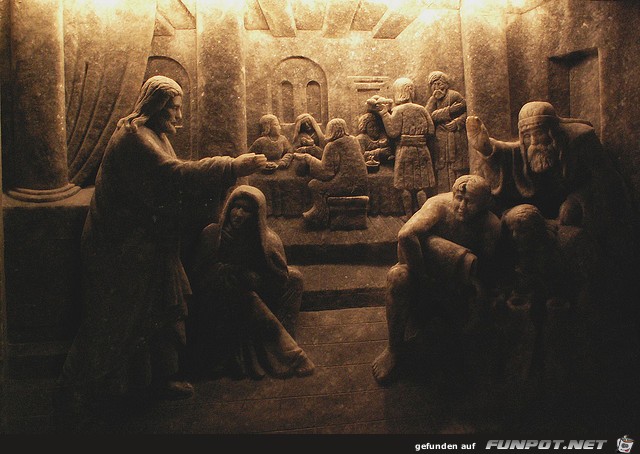 The religious carvings are actualy what draw many to this mine, as much for their amazing verisimilitude as for their Christian aesthetics. The above shows Jesus appearing to the apostles after the crucifixion, showing Saint Thomas, the doubter, the wounds on his wrists.
Another remarkable carving - a take on The Last Supper. The work & patience that must've gone into the creation of these sculptures is extraordinary. 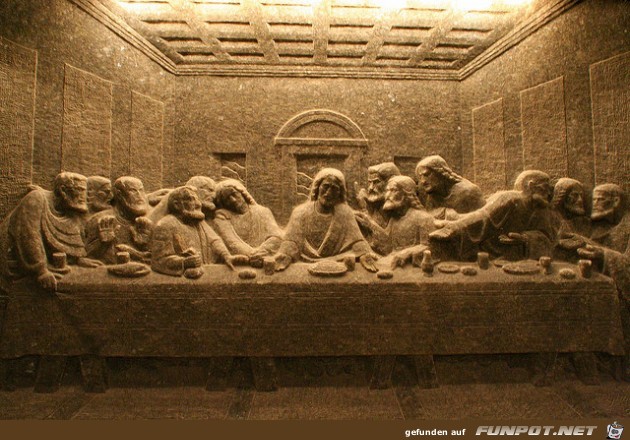 What would the miners have thought of their work being on general display? They became quite used to it - in fact even during the mines busiest period in the 19th century, the cream of Europe's thinkers visited the site. You can still see many of their names in the old visitors books on display. 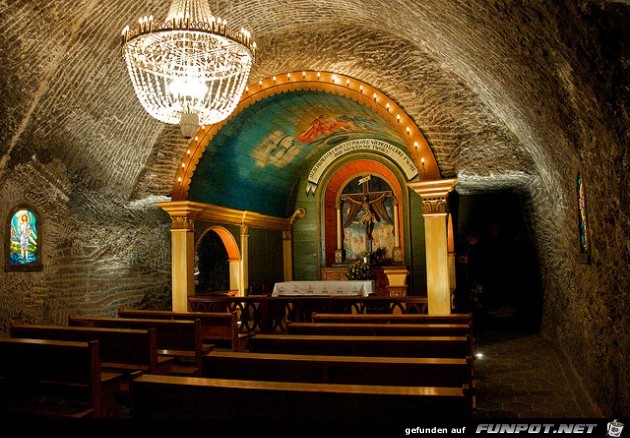 These reliefs are among some of the most iconographic works of Christian folk art in the world, and really do deserve to be shown. It comes as little surprise to learn that the mine was placed on the original list of UNESCO World Heritage Sites back in 1978. 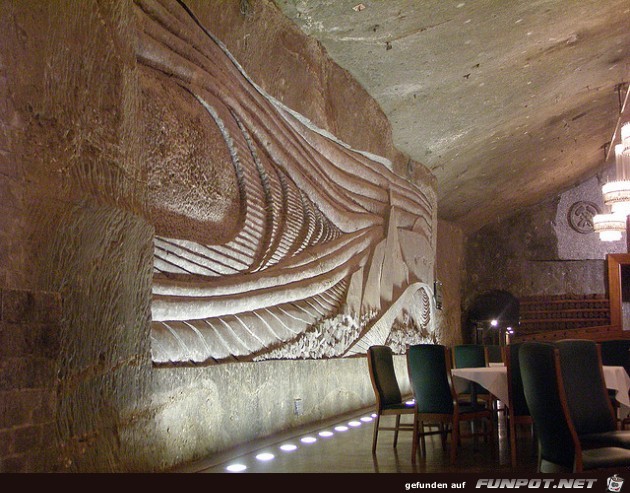 Not all of the work is relief-based. There are many life sized statues that must've taken a considerable amount of time; months, perhaps even years to create. 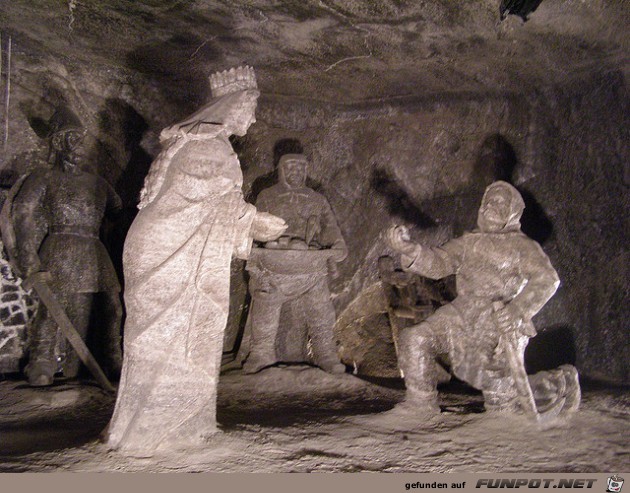 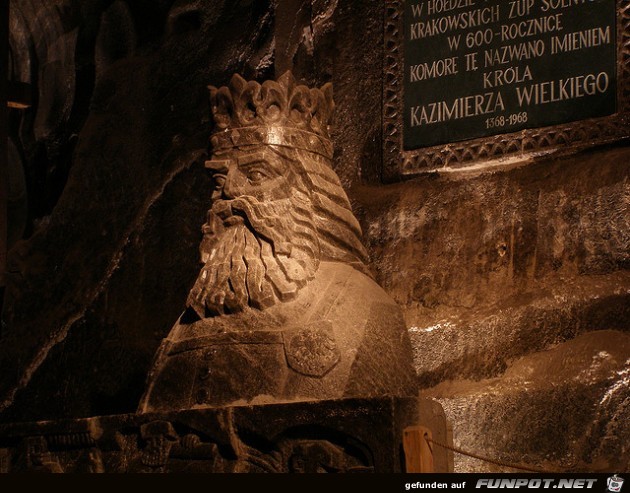 Within the confines of the mine there's also much to be learned about the miners, from the machinery & tools they used, many of which are on display and are centuries old. 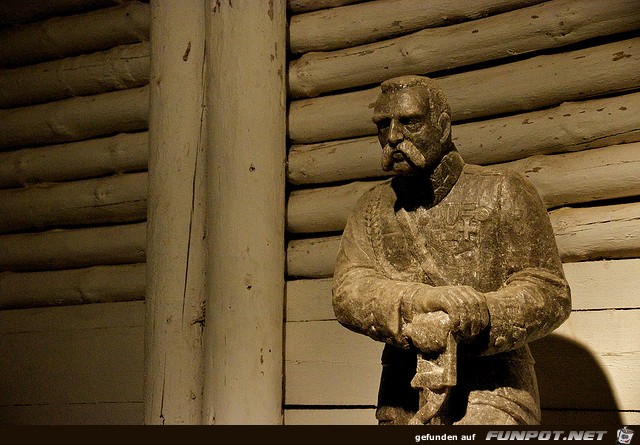 A catastrophic flood in 1992 dealt the last blow to commercial salt mining in the area, and now the mine functions purely as a tourist attraction. Brine is, however, still extracted from the mine and then evaporated to produce some salt, but hardly on the ancient scale. If this wasn't done, the mines would soon become flooded once again. 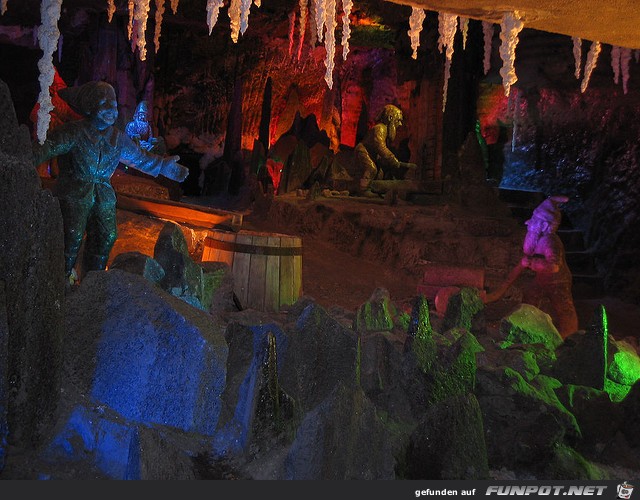 Not all of the statues have religious or symbolic imagery attached to them. The miners had a sense of humor after all! Here can be seen their own take on Snow White and the Seven Dwarves. The intricately carved dwarves must've seemed a kind of ironic depiction of their own work to some of the miners. 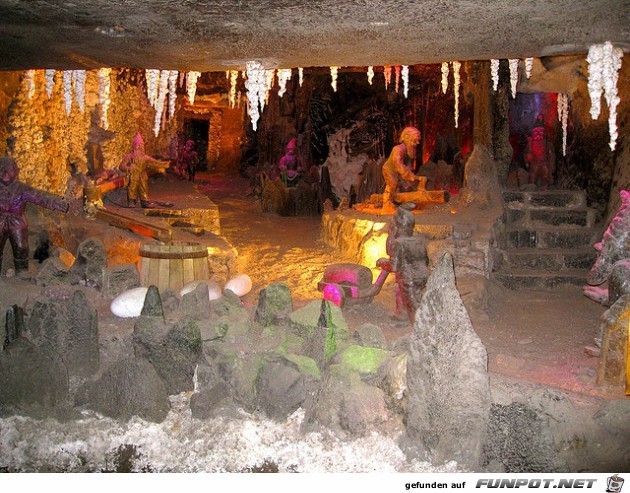 The miners even threw in a dragon for good measure! They may have whistled while they did it, but the conditions in the salt mine were far from comfortable and the hours were long. The fact that it was subterranean could hardly have added to the excitement of going to work each morning. 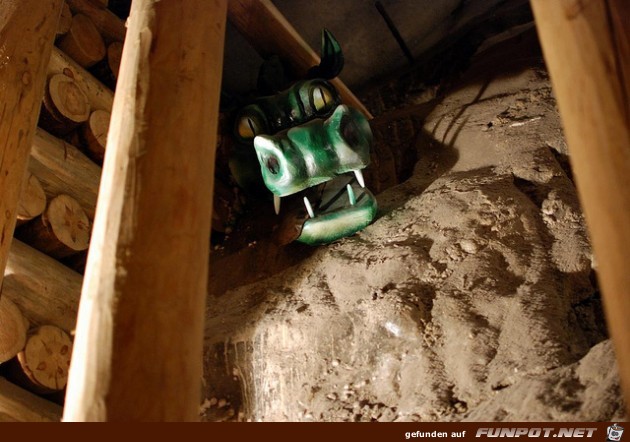 To cap it all there's even an underground lake, lit by subdued electricity & candles. This is perhaps where old legends of lakes to the underworld and Catholic imagery of the saints work together best to leave a lasting impression of the mine. How different a few minutes reflection here must've been, to the noise & sweat of everyday working life in the mine. 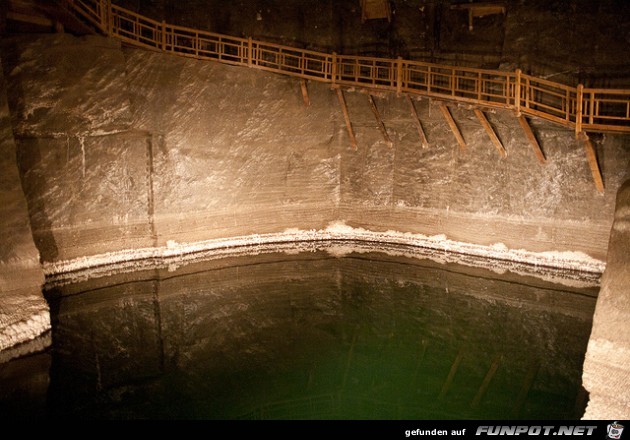 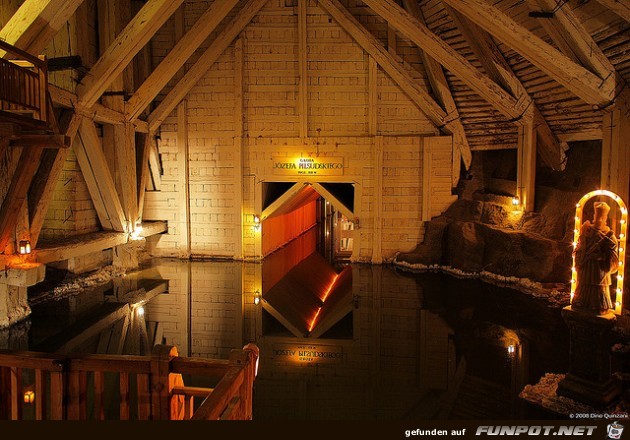 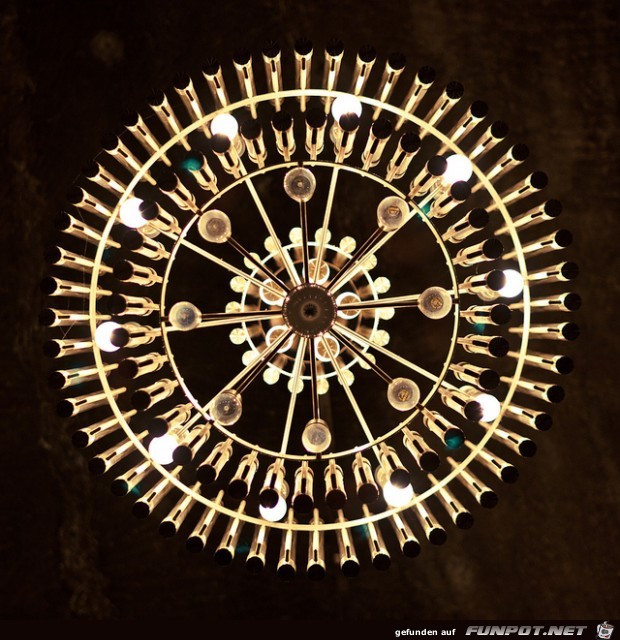 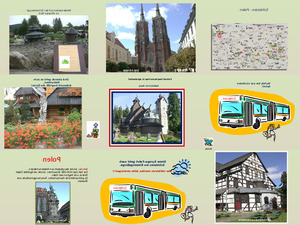