The first time we saw George, our beloved Great Dane, he was no more than a tiny, cowering ball of fu zzy fur. As my wife Christie opened the door of the crate he'd travelled in, he teetered to a standing position and looked out at us, moving his head slowly from side to side, taking in the wonder of it all. Finally, as if weighing us up and deciding we were acceptable, he tentatively pushed his little nose forward and gave Christie her first lick. 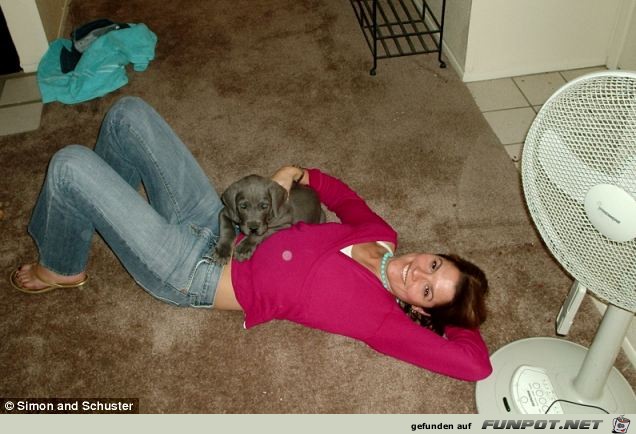 Even as a pup he had comically large paws.
He came into our lives in January 2006, just a few months after we had married and set up home in Arizona. We both had busy jobs, Christie selling medical equipment while I was a property developer, but she had always planned that, once she had a house of her own, she would also have a dog.
She wanted a Great Dane as they make great family pets, so we tracked down a litter of 13, born 1000 miles away in Oregon. Their owner emailed us a photo showing a chaotic jumble of paws, snouts and tails. Twelve were entangled with one another, but our eyes were drawn to one pup standing apart from the rest. He was clearly the runt, endearing him to Christie immediately.
Though it didn't really register, George's paws were comically large even then. But all we saw was this cute puppy. We certainly never dreamed he would one day become the biggest dog in the world, standing nearly 4ft high at the shoulder, 7ft long and weighing nearly 18 stone. Right now, he just looked bewildered.
George made the long journey from Oregon to Phoenix by plane and we picked him up from the freight area, tired but unshaken. As soon as George settled into our home, we discovered that our plans to be fair-but-firm parents were wishful thinking. All the things that make Great Danes wonderful pets - their lack of aggression and their attachment to humans - make them more emotionally sensitive than other dogs. They need to be with their pack" at all times, and at night the cute pup with intensely blue eyes turned into a caterwauling banshee whenever we tried to leave him alone in the kitchen.
No matter how much we reminded ourselves that he had every home comfort (warm dog bed, warm blanket, warm kitchen, squeaky bone), each whimper created a picture in our heads of a tragic, abandoned pup, desperate for his mother. Eventually, we gave in and shunted George's dog bed into our bedroom.

Magnificent: George measures more than 7 ft from nose to tail, weighs 18 stone, and is the world's biggest dog, but he's terrified of Chihuahuas... 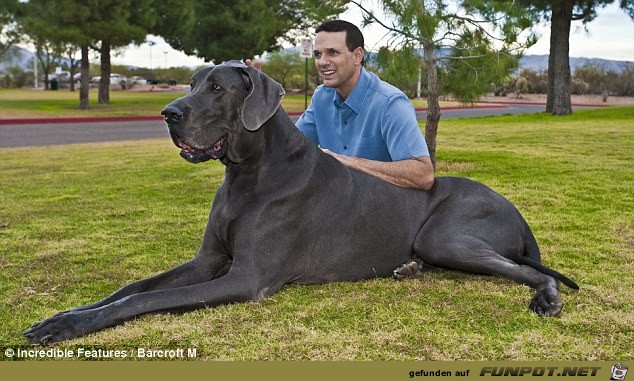 In the coming months, Christie really threw herself into being a mum to George. As well as a photo album, he had a growth chart... we
were soon reading it in awe. At 5 months he still acted like a puppy, chasing his tail and playing games of fetch and tug-of-war with his favorite bit of rope. But he was already the size of a full-grown Labrador. He was putting on more than 1 pound a day and bounded around like Bambi, skittering on our wooden floors and hurling himself at everything he fancied, including us humans. His displays of affection could leave you pinned temporarily against a wall or a piece of furniture.
His size did not go unnoticed in the outside world. Our local park had a section for puppies, but we were bullied out of it by other owners who were scared George would hurt their pups - but the opposite was true. The smaller dogs ran around and under him, and he'd be constantly side-stepping them, obviously anxious and jittery.
Slowly we realized that our enormous puppy was a big softie.
Besides his terror of being left alone, he had a fear of water. He'd growl anxiously at the side of our swimming pool, alarmed that his pack-members would so willingly place themselves in danger of drowning.
If the pool was his most-hated place, his favorite was our bedroom. Eventually he outgrew the single mattress we placed there for him and preferred instead the comfort of our king-sized bed - sprawling between us like some over-indulged prince while we spent half the night clinging onto the edges. 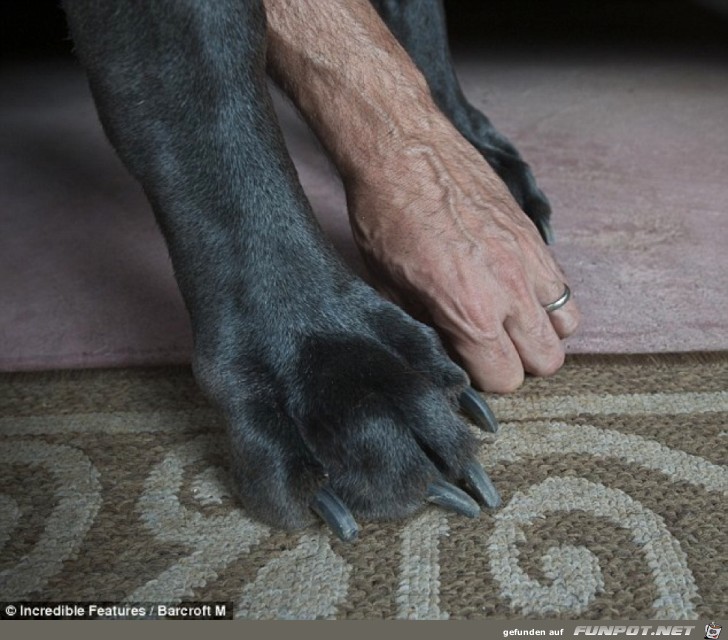 In the summer of 2006 we solved this problem by buying him his own queen-sized mattress, which he still sleeps on today at the bottom of our bed. But soon we encountered another challenge as George reached doggie puberty. Once, he had grabbed life by the lapels... now he was grabbing onto legs - table legs, chair legs, human legs, he wasn't picky - and doing what all male dogs do with the vigor of a canine giant.
He calmed down in the 'legs' department after we had him neutered, but then he took up a new hobby: eating as if it were an Olympic sport. A sausage on the barbecue was like a siren to a passing sailor. You couldn't turn your back for a minute. And he was so tall that he actually had to bend down to pinch food off kitchen counters. He could reach high shelves as well, so we had to hide everything away in cupboards. Soon, he was getting through around 100 lbs of dry dog food every month.
As he approached his 1st birthday in November 2006, weighing about 14 stone, it was getting physically impossible to make him go anywhere he didn't want to - including the vet's surgery. He had not forgotten the time he went there in possession of his manhood, and came out less than whole. As soon as he recognized the entrance, he refused to move. So I had to take him around to the less familiar back door instead.
For all these troubles, George gave us plenty in return, not least the following year when Christie lost the baby she was carrying. Evidently tuned in to her grief, George was a constant presence at her side. When she sat, he sat too. When she stood, he stood and padded alongside her to wherever she was going.
His personality grew more delightful the bigger he got. A male Great Dane typically weighs from 9-11 stone, but by Christmas 2007 George weighed 15 stone - bigger than most men. At this point, he loved being chauffeured around in my golf cart and would sit in it, his haunches on the seat and front legs on the floor.
By Christmas 2008 our canine colossus weighed 18 stone. A friend suggested he might be a contender for the Guinness Book of Records but we had other things to think about: Christie had discovered that she was pregnant again.

With size comes problems: George the giant barely fits in the back of his owner's SUV 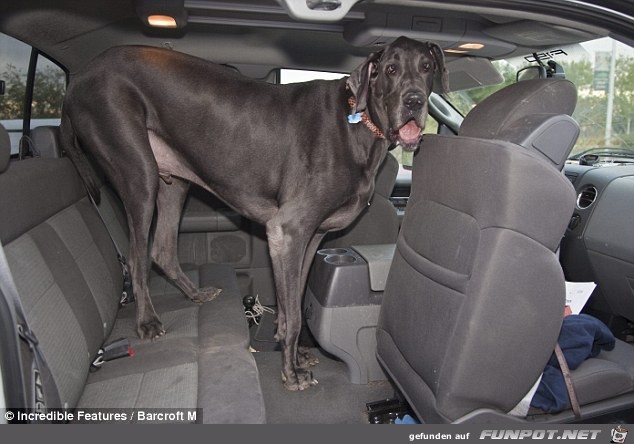 The trouble was, when our daughter Annabel arrived that September, George made it clear he wanted nothing to do with this interloper. He was used to spending nights in delightful oblivion at the foot of our bed. Annabel's high-decibel presence simply wasn't on. When she cried, he'd wake, harrumph, and then turn over in annoyance. Once it was clear the racket was going to continue, he'd exhale heavily again until one of us finished that mysterious feeding thing we did with the noisy intruder.
But while he might not have cared much for Annabel, George loved her dolls, especially a stuffed green one that played a nursery rhyme when squeezed. Whenever he could, he placed it between his paws and pressed it so he could hear the tune. It was like a security blanket. It was a period of such big adjustment for him that if it made him happy then it was fine by us, and our patience was rewarded.
Slowly, George understood that Annabel was our pack's youngest member and in need of his affection & protection. And on Christmas morning he ended his three-month sulk, acknowledging her presence with a lick of her hand. It was the best present we could have had - although the beginning of 2010 brought more good news.

A doggone miracle: George the Great Dane with the Nassers' daughter Annabel at home in Arizona

Over the previous weeks, while Annabel slept, Christie had applied to the Guinness World Records people on George's behalf. That February, one of their adjudicators came to watch George being measured in the presence of a vet. He was officially declared not just the world's tallest living dog (43 inches from paw to shoulder) but the tallest dog EVER.
The following week we flew to Chicago to appear on the Oprah Winfrey Show and were put up in one of the city's most luxurious hotels. We had a huge sitting room, dining area and even a bar - but there was just one problem....
There was nowhere for George to sleep. That night, as we enjoyed a gourmet meal and a bottle of red wine, he struggled to settle on two roll-out divans provided for him. Infuriatingly, they wouldn't stay together. So, he had his head on one and back end on the other, but his stomach was sagging onto the carpet.
"You know what we need to do," I joked. "Give George our bed to sleep on and have the divans in this room ourselves."
Christie looked at me with a telltale gleam in her eye and I knew immediately my joke had been a fatal error. An hour later, our boy was sprawled in splendour in our huge, fluffy king-size bed.
"Well," whispered Christie, "George is the star here after all." She was right, of course, and since his appearance on TV, Giant George has built a following around the world, with his own fan club, website and 70,000 fans on Facebook.
None of this, of course, means anything to George. He still spends his days doing what he has always liked best: eating, playing and sleeping. Our cherished pet may have become a global celebrity - but really, he's just one of the family. 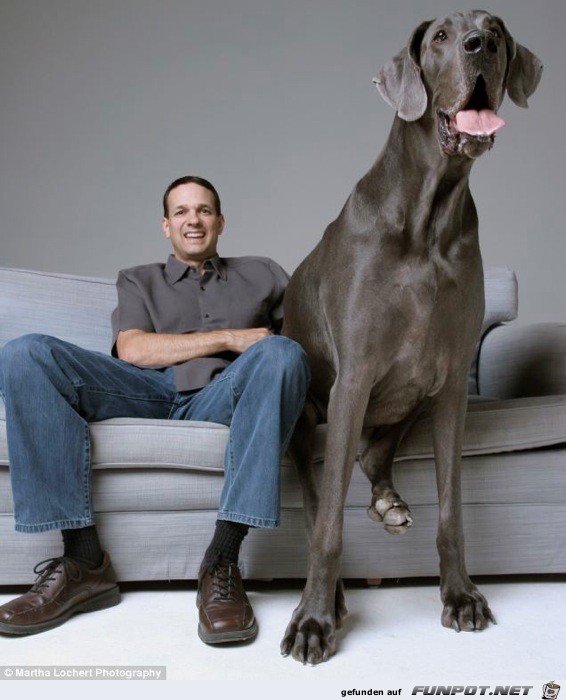